As luck would have it an ash Strat body blank – roughly cut out but un-routed – appeared on eBay.  It was a slight second but the damage was just a tiny bit of bark on the edge which would be removed when the edges were rounded over. I usually cut my own blanks but this was too much of a bargain to pass up.

Out came the trusty ‘universal’ template and a H/S/H pickup rout was added. I took care to keep the bridge pickup rout separate as the pickguard doesn’t cover it. 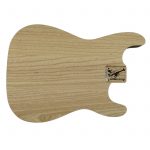 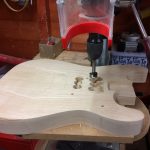 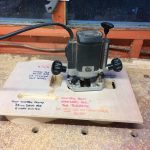 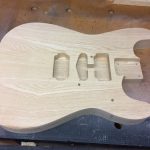 You can see the ‘damage’ on the lower bout at the bottom of the large picture above. Hardly worth worrying about. The neck rout is big enough to take a humbucker or a P90. The middle rout probably won’t get used but it’s easier to cut it now and not use it than it is to add one later.

Here’s a basic mockup. I managed to find a Squier ’51 pickguard from somewhere, which fitted the body remarkably well. I was going to use a ’51 Precision Bass control plate but I found this one with three holes which is perfect. Unfortunately I bought the last one in the world so this will be the only one of this type of guitar I make!

I tried loads of different bridges but I’m going with my trusty Schaller 455. I considered the Wilkinson cut-down Tele bridge like I used on the Staccato Mamba but I prefer a Gibson bridge. That does mean I’ll need to angle the neck to account for the higher bridge. Oh well. If it’s too easy it’s no fun…