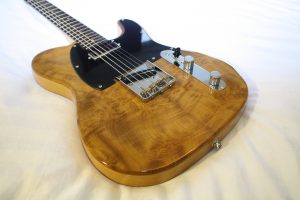 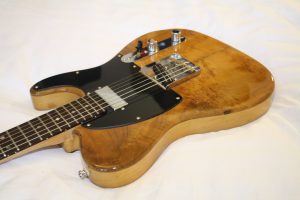 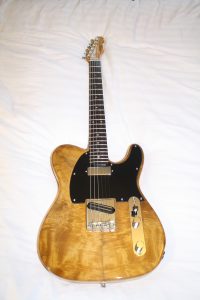 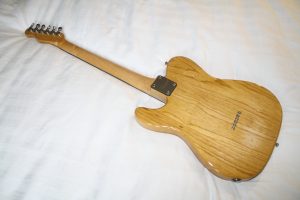 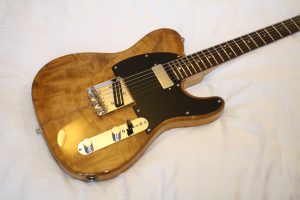 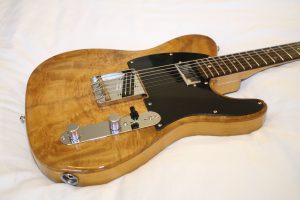 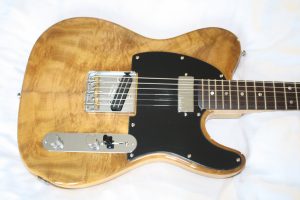 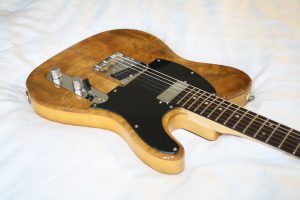 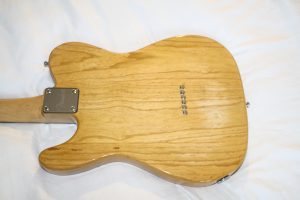 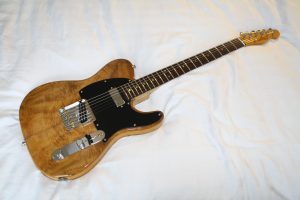 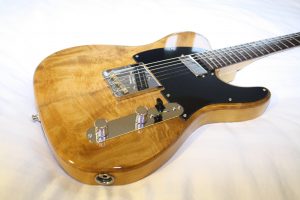 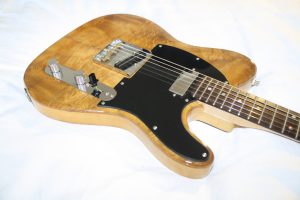 The original ‘Bluescaster’ with its myrtlewood top (which later became the Staccato Mamba) attracted so much attention when I first made it that I thought I should make some more. Unfortunately I left it too late and the supply of timber had almost been used up. Luckily there was one bookmatched set left, and it turned out to have some of the most spectacular figuring I’ve seen. It has both flame and birdseye figure, and a beautiful amber colour.

At the time, my woodworking skills were not quite up to the standard required by the wood, but I held onto the part-finished body until I had the tools and experience to do it justice, and this is the result.

Construction-wise there is nothing unusual about this guitar. It’s a standard ash T-style body, with some fairly substantial chambers routed under the 3/8″ Myrtlewood top to reduce the weight. I got slightly carried away, as this is now a very light guitar, but it sounds really great, even unplugged. I’m not completely convinced that ‘tone chambers’ make much difference to the sound when the guitar is plugged in, but it certainly hasn’t done any harm in this case.

The neck is maple with a wenge fretboard. Wenge is absolutely my favourite fingerboard wood. Its exactly the right colour and texture, it sands and planes nicely and it polishes to a mirror shine. Unfortunately it’s become very hard to find as it comes from a troubled part of Africa. Luckily I bought shedloads of it while it was still cheap so I have enough fretboards to keep me going for a little while.

Under the pickguard there are routs for both a neck humbucker and a middle single coil. I decided to be slightly unconventional with the pickups, just to show that a Telecaster isn’t just for country pickers. There’s a rail TT73 humbucker from Axesrus in the bridge position, which isn’t actually as hot as the advertising blurb makes out. It’s actually a very nice hot PAF rather than the face-melting monster they imply in the description.

I tried loads of neck pickups, and rather to my surprise my favourite turned out to be the Wilkinson Firebird-style mini humbucker. This is a really nice sounding neck pickup. It’s bright enough to cut through in the neck position without being piercing.

Hardware is also fairly classic. I’m a big fan of the Wilkinson Tele bridge, as you will see from some of my other guitars. The quality is very good and the chrome is uniformly shiny, unlike a Fender plate, which is as rough as a badger’s underparts. Best of all, it has really trick compensated brass saddles which give the traditional look and sound, but with proper tuning intonation.

The switch is a four-way, with full humbucking in position one, split bridge in two, split and neck in three and neck only in four. The neck humbucker can’t be split so it’s full humbucking all the time. The split TT73 sounds suitably authentic if you want traditional Tele sounds.

This guitar has now been sold.