The second Strelecaster was made using an Alder body blank, a Maple neck and a Wenge fretboard. I vaguely recall that I got the body shape by making a template off my Tokai Springysound. It’s actually not very similar to a ‘real’ Strat at all. A standard replacement pickguard doesn’t come close to fitting. 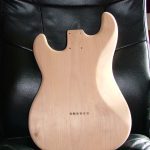 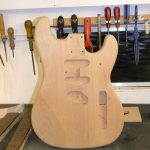 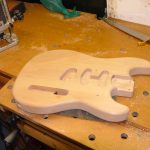 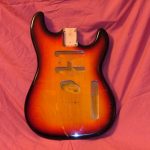 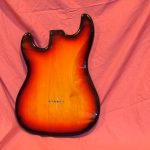 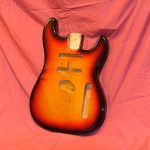 This was one of the first guitars I made using templates rather than freehand routing. If you look closely you can see the holes for the dowels I use to locate the templates. I’ve refined the templates slightly over the last few years but most of my guitars still have the holes under the pickguard. I could fill them, but I think it’s quite nice to leave something to show it wasn’t done by a robot.

The single coil routs are long enough for a Danelectro-style lipstick pickup. I don’t do that any more as you can get lipstick tubes that fit a standard rout now. Also I have never used a lipstick pickup and probably never will. My standard template now has an S-type single coil in the middle and a universal rout at the neck which will take a humbucker, P90 or S-type single coil. It’s much easier to make a body which will accept any pickup combination even if the original plan doesn’t use all the holes. That way it’s easy to add another pickup just by changing the pickguard. The Telecaster bridge pickup is the annoying exception to this – once you have cut a Tele rout there is no going back. A humbucker or Filtertron with surround might just cover the hole if you later change your mind, but there’s no way you can put a P90 in there.

I recently took the opportunity to ‘reboot’ this guitar. There were many things about the original build that didn’t meet my current quality standards, and a few bits that just didn’t work properly. In particular the neck pocket had been routed too deep and the bridge pickup rout was too small so the pickup fouled against the side. I have far better templates now so I recut the pickup routs and put an alder shim in the bottom of the neck pocket.

There were far bigger issues with the neck. Realistically it should have gone straight in the bin, but I hate to waste things so I had a go at salvaging it. It had huge, bass guitar frets in it because I had a Stevie Ray Vaughan phase back when I first made it. They had to go. The linseed oil finish was dirty and sticky, and most significantly the holes for the tuning machines were too far over so the strings were being pulled out of line.

I pulled the frets out and levelled the rather wonky fingerboard. Now confident that the neck was going to be playable, I plugged all the old tuning peg holes. Using my new jig I recut the holes in the right place, and reamed them out at the back to accept modern, sealed tuners. I decided that I didn’t like the big, CBS-type headstock I’d originally used so I reshaped it to a Telecaster style. This turned out to be a bad idea as the old headstock was actually too small in some places. I ended up having to glue little fillets of wood on and it looks pretty shoddy. Still, it works and from a few feet away you can’t tell. This guitar is only for me to knock about on in my lunch break at work, so the cosmetics aren’t that important. The body is pretty battered anyway.

With it all back together I installed an IronGear Steel Twin tapped Telecaster pickup in the bridge and the original Kent Armstrong middle and neck pickups. Simple volume and tone controls with a push-push switch for the tap took care of the electrics.

I’m not convinced that the work was worth the effort. The neck is still pretty poor. The fingerboard side is fine, but the back of the neck has had far too much materiel taken off in my attempt to create a ‘soft Vee’. It’s actually more like a toblerone.

One day I’ll do a Mk3 version of the Strelecaster and get it right!