This Malcolm Young-inspired guitar started out as a rather tatty silver sparkle (actually more of a metallic grey) Double Jet from around 2006, with the weird inset mini humbuckers and a Bigsby. I wanted one of the older ones as they had the ‘neo classic’ thumbnail fretboard markers. The newer ones have hump-block inlays, which wouldn’t be right for this project.

What I didn’t realise is that the older ones are not completely hollow. There’s some routing going on as it sounds hollow when you knock it, but it doesn’t have the huge cavity inside like the black 2008 one you can see in a different post. It also weighs a ton…

Malcolm Young’s original guitar – called the Beast – has an assortment of holes in the top where all the unused electrics have been removed. There’s also an extra hole where a middle humbucker was fitted, then removed again. For some of its life the Beast also had a rather phallic plastic cover known as the ‘Bishop’s Helmet’ screwed over the hole where the Burns vibrato used to fit.

I pondered recreating these features but decided that I didn’t want a full-on replica, just enough visual cues for the audience to know I’d made the effort. It was far more important for the pickups and hardware to be right for the period, as it’s the sound which is important.

I was looking to capture the sound of the Bon Scott-era albums, with Mal’s barely distorted but very clear and rich tone. He was using a stock Filtertron at the time, so that’s what I would use. As an added bonus a genuine Gretsch Filtertron is half the price of a TV Jones.

Malcolm removed the stock Burns vibrato and Space Control bridge very early, and replaced it with a Leo Quann Badass. That bridge isn’t available any more and the lookalike clones I found were very poor quality. Plan B required…

Luckily, Malcolm took his guitar to John Diggins some time in the early eighties as he liked the work John was doing for Angus Young at the time. John rewound the pickups to give the Beast more power, and also built three new guitars for Malcolm to use. Most importantly, he replaced the Badass with a Schaller 455. Nobody seems to know why, and I forgot to ask John when he repaired my Diablo last year. His workshop is not far from where I work, so I’ll have to ask him one day. Anyway, the Schaller 455 is still available and reasonably priced, so that concluded the hardware selection.

I suspect the hardware on the Beast was originally gold, and what’s left of the pickup surround also looks gold, but I decided to follow the lead of the MY signature guitar and go with nickel / chrome and silver. The Filtertrons came with nickel covers so I ordered a bridge to match. I prefer nickel to chrome most of the time, unless it’s on a black guitar. Never mix the two though. Chrome has a blue tinge and nickel has a yellow tinge. If you put a nickel pickup on a guitar with chrome hardware it looks terrible.

For the time being I’ve retained the stock tuners, but that might have to be changed soon – we have some tuning issues!

With the guitar stripped of its hardware, the biggest job was to lose the weird mini humbuckers and rout the body for Filtertrons. I’ve detailed this in another post, so I won’t go into too much detail here. I decided to do all the machining before I stripped the top so I wouldn’t damage the wood. 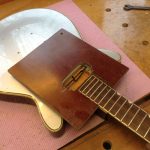 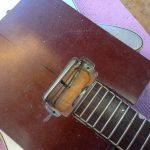 At the time I only ever expected to do this once, so I didn’t make a template. I used a Humbucker template and freehand routed the filtertron shape. Bad idea. It worked, but took so long I’d have been quicker making a proper template, which is what I did for the next guitar.

Malcom’s guitar had the paint removed from the top very early on in AC/DC’s history, so that’s the next thing to do:

It looks like all the Double Jets started off black, and then the gold or silver paint was sprayed over the top as required. The paint and lacquer was so thick it just splintered off in huge chunks. It took about ten minutes to get it back to the original clear sanding sealer, which I decided to leave in place:

The body now had holes in it where the screws for the Bigsby were. I was also going to be using a bridge with different size and pitch posts, so these all needed filling: 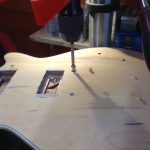 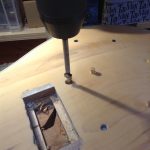 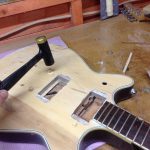 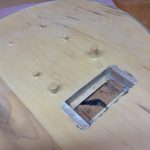 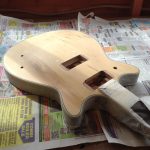 I have forstner bits with matching plug cutters so I can perfectly plug the holes with offcuts of maple. I tried to get the grain pattern to match so the plugs would be nearly invisible when finished.

The guitar looked a bit anaemic in bare maple. Mal’s guitar has aged and turned an amber colour, so I test shot a coat of transparent amber lacquer over the sanding sealer. It looked bright yellow, and I hated it. I stripped that back off and tried a very weak light brown, which was much better.

I then realised that I’d forgotten to drill the holes for the new bridge, so I got onto that before the clear coat went on:

The original bridge was in the wrong place, meaning the intonation couldn’t be set perfectly. I didn’t want to blindly recreate this mistake so I measured and marked the position of the posts very carefully. The Schaller bridge is one I’ve used many times and I really like, but the post inserts are a really weird size. I can’t find a Forstner bit the correct size so I had to be very careful with a normal ‘jobber’ drill. Without a pillar drill this is pretty much impossible to do neatly. Ask me how I know this… 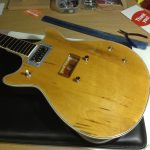 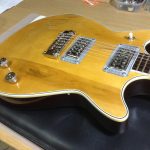 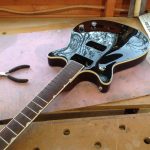 With a couple of coats of clear cellulose lacquer on and polished it looks pretty good. It’s not the prettiest maple top ever, but that’s part of the charm. It’s a stripped down working guitar. Electrics are just two volumes and a switch. No tone to make things muddy – this is pure Gretsch clank and spank.

It sounds exactly how I’d hoped it would – perfect for early AC/DC. It balances very badly on a strap so you have to reach out for the end of the neck. It makes you adopt the classic MY pose. The neck pickup sounds really nice, but I doubt it will ever get used.

This was a pretty easy project compared with some, and was done over a weekend. It was well worth the effort, and far cheaper than finding an original Jet Firebird or a MY signature.