The ‘Chibson’ ’56 Thinline had more than a few issues when it arrived: 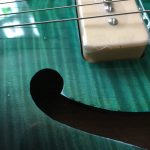 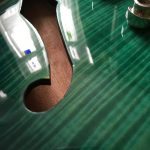 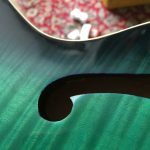 The hardware was also a bit nasty, which I did expect. To be fair the tuners and bridge were not too bad but I had better ones in stock. The tailpiece was the wrong shape and pot metal so that had to go. The wiring harness  was functional and used decent, full-sized Alpha pots. I reused these as they worked and had a nice feel to them. The switch (which had ‘Epiphone’ logos on) was a proper open-frame type which I also re-used.

The supplied pickups were so bad it was laughable. Really thin and weedy, nothing like a P90. Closer inspection revealed that they had hardly any wire on. A P90 has the oblong coil completely filled with around 10,000 turns of wire and a DC resistance around 8Kohms. These were around 3K.

Just to add to the annoyance factor, the supplied pickups had pole spacings of 48 and 50 mm. The replacement pickups I had were 50 and 52mm. So the supplied covers wouldn’t fit my new pickups. AAAAGH! I did have a set of black covers which fitted, so there are a few pictures here with black covers while I waited for cream ones to arrive.

To be completely fair, there are also aspects of this guitar which are good. Some parts are even excellent:

Basically the neck is amazing but the body is a bit pants. It looks great from a few feet away but it’s actually dog-rough.

However, after a weekend in my workshop it plays superbly and sounds killer. The neck is actually one of the nicest in my collection. In fairness I did less work on this than I have done on more expensive guitars to get the same result. Here’s the list:

Unfortunately the cosmetic issues, particularly the awful state of the F-holes, let the whole thing down. It might play and sound great (after I’ve fixed all the fundamental construction issues like the bridge being in the wrong place), but it still looks like crap.

I had hoped that I could order a few of these and sell them as official Bedlam guitars, but I wouldn’t be prepared to put my name on them. This maker just doesn’t meet my quality standards. If I ever did find a satisfactory manufacturer I would probably order the guitars without hardware and assemble them myself.