I like Telecasters but I am used to the Gibson scale length. I’ve seen retrofit necks but they were very expensive. So how hard can it be to fit a Gibson-scale neck on a Fender guitar? 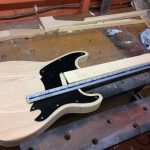 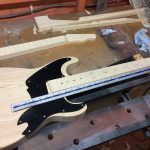 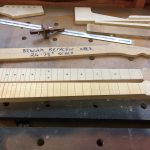 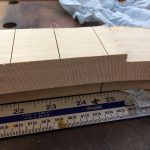 After a bit of hard thinking, it’s not very difficult at all. The main problem is that you can’t just make a shorter neck and lob it on. You have to lose 3/4″ of scale length but you have to lose all of it on the neck even though nearly half the string is over the body. Because the bridge is in a fixed place on the body and doesn’t have much adjustment, you have to drag the whole fretboard down towards the bridge to keep the relationship between the nut bridge and frets correct.

Normally a Tele neck joins the body at the 16th fret. With the hybrid neck it’s around the 17th fret. You can just about fit a 22nd fret but it’s hanging right off the end of the fretboard, suspended in the air. 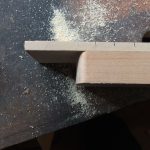 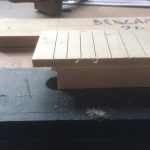 On the left is a normal Strat neck with the 22nd fret just on the end of the neck. On the right is the hybrid and you can see the neck finishes somewhere between the 22nd and 21st frets.

Once the position of the frets was sorted out I made a new, short template and the rest of the build was just like any other bolt-on neck. 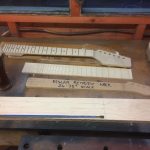 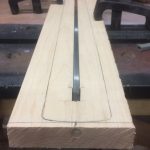 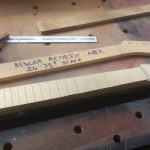 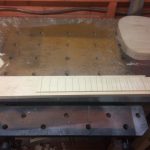 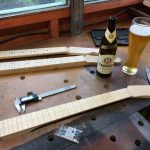 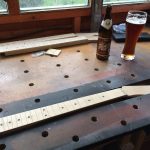 I always install the truss rod from the front of the neck and fit a separate fretboard. This one is lightly flamed maple. The neck blank is also maple. As you can see I often do several necks at once while I have all the tools out. 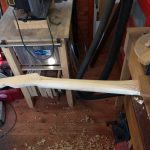 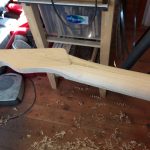 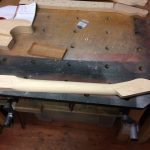 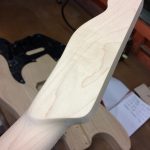 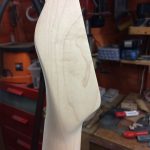 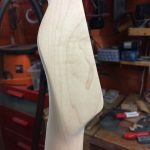 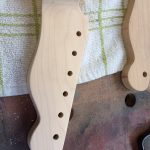 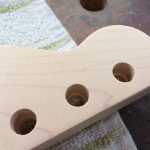 The neck is finished in Truoil. In the past I’ve used boiled linseed oil very successfully. This is supposed to be better. We will see. Looks good so far. 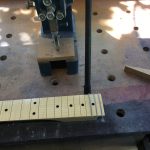 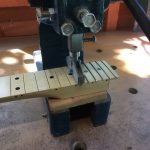 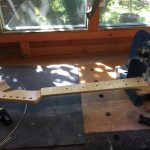 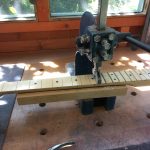 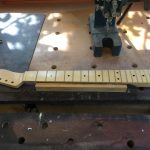