This is a historic build from the end of the ‘Scottish’ period of Bedlam Guitars back in the late 1990’s to around 2001. At the time I was in the RAF and was posted from Lossiemouth to Brize Norton. I had to move my workshop into a modified caravan so guitar production stalled a bit while I got sorted out. After a bit of work, the caravan became the main base of operations for a long time, and was actually a pretty decent workshop. Towing it down the M5 at 4am was not much fun though. It was basically a four-hour-long near-death experience. Never again.

Anyhoo. My good friend Derek Gordon is a massive Status Quo fan, and he asked for a tribute to Francis Rossi’s famous green Telecaster. Normally I wouldn’t do this sort of commission, but I agreed on this occasion. Derek lived in the cottage next door and had already bought one guitar so we were on a bit of a roll!

It ended up taking me a very long time, but Derek was impressively patient. 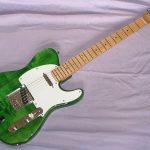 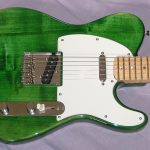 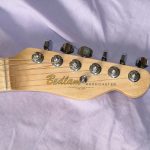 It came out looking pretty nice. It’s not distressed but I did put a bit of wear on the green stain to make it look more authentic. It was never intended as a perfect replica but it incorporates the important features like the unique green colour and the hole in the body behind the bridge.

The body is poplar, from a tree we felled ourselves if I remember correctly. My memory is a bit vague on the details but I vaguely recall that we had a local sawmill mill it and kiln dry it for us. The pieces were quite small, so the body is a spread of four. There’s a little bit of figuring in the grain just behind the bridge. The timber is very soft and wouldn’t be my first choice for making a body. Which is annoying as I still have two blanks left over from this project! 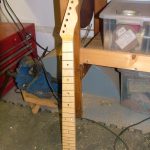 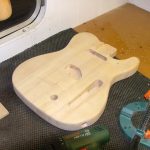 The neck looks like one-piece maple, but actually I used a separate maple fingerboard. The normal way of making one of these necks is to install the truss rod from the back and fill the slot with a walnut fillet, but I prefer to make all my necks with a separate fingerboard and install the rod from the front. This one has the adjusting nut at the body end like the originals, but I can also put the nut at the other end. I prefer not to, as it just encourages people to mess about with it.