The frets on this guitar needed some attention. They were fairly soft and not very well fitted. The previous owner had been in an AC/DC tribute band so the first three frets were very worn. Rather than wasting time trying to save them, it was best to rip them all out and install a new set using quality wire. It also gave me the opportunity to try out some new tools.

To pull out the frets I used a small pair of end-cutting pliers which have been ground to get right under the fret. This lifts the fret without tearing out any wood. The fretboard was in reasonable condition, but you can see where the binding has been scraped between the frets. There were a few grooves around the open chord position where the owner’s fingernails had worn the timber away. 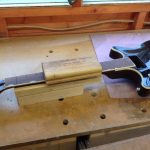 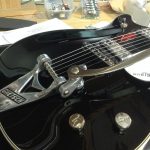 With all the frets carefully pulled out, the first thing to do was to tidy up the fretboard. I like a 12″ fingerboard radius so I used my 12″ block with a sheet of sandpaper stuck to it. This board was already pretty close to 12″ so it didn’t take long to dress out the fingernail damage at the nut end and blend in the binding. The neck was carefully supported because I didn’t want to sand a hollow or lump into the board. I should really have put some tape on the painted face of the guitar to protect it. I got away with it this time. 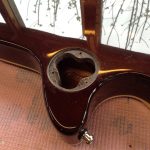 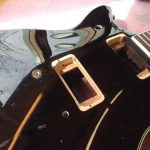 I used a series of increasingly fine papers on the radius block, then finished with a 5000 grit fabric-backed  abrasive on a rubber block to put a fine polish on the board. Finally I oiled the board with lemon oil. After all that, the fretboard looks really good.

You’ll notice there’s a nut fitted. I wouldn’t normally fit the nut yet, but this is the base section of a special compensated nut I’m trying and it needed to be radiused the same as the fretboard. 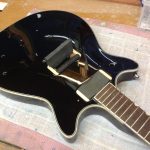 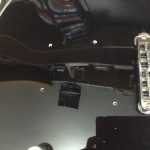 New tools time. The thing with the red handles nips the end off the tang of the fret. This lets me fret a bound fingerboard. The end of the fret overhangs the binding giving a really neat finish. It works really well, which I’m quite surprised about as it was fairly cheap. The little hammer gets the fret started in the groove, and the press pushes it in the rest of the way. The press is a cheap one from eBay which I adapted slightly to take the pressing tool. It has interchangeable blocks to allow for different fingerboard radii. The quality of the pressed frets is much better than if I just bashed them in with a hammer, but the press doesn’t open far enough to accommodate end of the neck where it joins the body. It works perfectly on Fender style necks which are thinner, but for these set necks I need a bigger press.

I used Jescar 47104 Nickel Silver wire in a medium / jumbo profile that’s very similar to the original and is a good match for the generic ‘jumbo’ wire used on most East Asian imports.

I always start at the wide end of the neck so that if I accidentally cut a piece of wire too short I can use it further up.

Another new tool. This one cuts the fret ends down to the width of the fingerboard, then you turn it over and it cuts the bevel on the frets. It works very well, but the metal filings stick to the nylon block and scratch the frets. I usually re-crown the frets anyway, but it’s not perfect.

The rest of the job is fairly straightforward and exactly what I do with any guitar when I first acquire it. I check there are no high frets and stone them if necessary. Then they get re-crowned and finally polished. I hate crunchy or gritty string bends, so I ensure that the frets are polished like glass. The fretboard gets another clean and re-oil and we’re done.

I’ll take the opportunity for a little rant here. People have an annoying tendency to mess about with the truss rod, but unless the frets are level and correctly crowned, there is no point. Getting the frets right is absolutely crucial to achieving a low action without buzzes. It’s not actually difficult if you have the right tools. It seems fairly drastic, and it’s probably best not to practice on your £5000 Gibson R9, but it will transform a mid-price guitar like this one.

All the work above took about two hours. I did a load of other stuff too, so the guitar was in the workshop for a whole weekend.