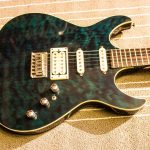 This guitar was an early commission, made for my brother, with most of the design work being done by him. This was before the days of email, and I lived about 400 miles from him at the time so we sent the design drawings back and forth through the post over a period of a few weeks. Seems ridiculous now!

The basic shape was inspired by the discontinued Fender Esprit. Although it has a similar, symmetrical outline, it’s actually quite different. The cutaways are wider, the lower bout of the body is more flattened and the top is flat, not carved. We have never come up for a name for this design. When I texted Pete a few minutes ago to ask what name we should use, the reply was, ‘Harold’. OK. Ladies and Gentlemen, please allow me to present the Bedlam Harold.

Although it has a very ‘Gibson’ look to it, with a set neck and angled headstock, the timber choice is very much Fender inspired. The body is ash with a 6mm quilted maple top. The neck is maple with the headstock scarf-jointed on. The fretboard is unbound striped Macassar ebony. This stuff is not particularly nice to work with as it chips very easily when you install the frets, but it looks stunning. To show off the wood we decided not to fit any fretboard markers. The scale is also classic Fender at 25.5″.

A solid body this big would be really heavy so there is a large cavity routed under the top, above and behind the bridge. The really trick bit is the way the pickups are fitted. The bridge pickup is mounted conventionally, hanging from a pickup ring. We considered screwing it directly to the body timber and omitting the ring but neither of us liked the way it looked. The single coils are mounted into the top as if it was a pickguard. There is a  channel under the top running from the control cavity which is just big enough to slide the pickup into. I poked the pickups down this channel and wiggled them into their final position. By lifting them with the handle of a bent spoon I was able to get the screws in, and the pickups now adjust up and down in the conventional manner. There is no cover on the back and no pickguard on the front. It was a bit of a faff to do, and I wouldn’t be in much of a rush to do it again, but it looks much neater than the usual way of mounting single coils from the front with an unsightly gap around them.

Rather than following the Gibson standard of control positioning, we decided to follow the Fender layout which puts the volume control in a more accessible position. At the time I made the guitar I didn’t have a way of accurately cutting the slot for a 5-way lever switch in a wooden top. Rather than risk damaging the beautiful quilt top, I fitted a rotary switch in the position where the second tone knob would be on a Strat. The pickup selections are exactly the same as a Strat, with a separate mini switch for splitting the coils on the bridge pickup. Pickups are all ‘Sky’ by Kent Armstrong – a ‘Rocker’ at the bridge and a calibrated pair of ‘Kent Specials’ in the neck and middle. I’ve used the ‘Rocker’ many times on different guitars and it’s one of the most versatile pickups around.

The guitar sounds great and looks great too, but I’ve never been completely happy with it. The neck back-bowed very early on, and even though I have re-levelled it and replaced the frets, it’s still not right. I also stained the top too dark so you can’t see the figuring of the top properly. The rotary switch works but it doesn’t give a good visual indication which pickup you have selected. Nevertheless, the concept and the build quality are both sound so we have decided to ‘re-boot’ this guitar over the summer. I’m going to remove the fretboard, replace the truss rod with a double-acting one, fit a new fretboard (I actually bought two blanks at the time I built this guitar and I still have the spare), rout the control cavity out to take a 5-way lever switch, strip the top and refinish it in nitro-cellulose.

This shape has great potential and I’m planning several variations. One will have a Gibson scale, P90s, TOM and Bigsby. Another will have a carved top and humbuckers. I’ve also designed an offset version with the bass side moved 1 1/2″ towards the headstock.