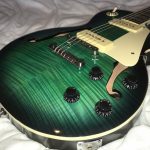 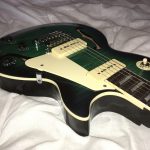 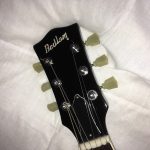 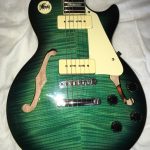 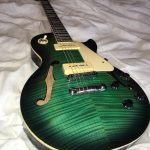 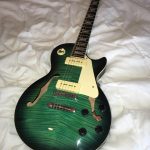 I want to stress immediately that I did not make this guitar. It was made in China and purchased through Aliexpress. I did this primarily because I wanted to see just how good (or bad) these cheap Far-Eastern guitars were. I had also received comments from a couple of potential customers implying that my prices were too high and that a comparable instrument could be bought from China for less money. Also I’d had an idea for a guitar in my head for a long time and I wanted to test the concept before I committed an expensive slab of figured maple and mahogany to it.

I mocked-up the design and colour of the guitar using an on-line tool and it came out like this:

I sent that to the manufacturer in China and he built the guitar to my specifications. The top is solid Maple with a flamed veneer  and the body is some sort of mahoganish stuff. The neck is a single piece of mahoganish. The final colour came out slightly more green than expected but it’s still a good colour:

Overall the project was a success. I proved everything I wanted to prove. The quality of the guitar was really rather poor. It played well after a moderate amount of setup work, but it was cosmetically very rough and had fundamental construction errors. I’ll detail these in the page showing the overhaul.

So to those who believe that you can get a perfectly good LP guitar for £250, YOU CAN’T.

What you can get is a LP-shaped instrument which needs all the hardware and electrics replacing and a couple of days’ work in a fully equipped workshop to bring it up to an acceptable standard. I’m sure a novice player would be quite happy with the instrument I received, but it fell far short of what I would accept, and I certainly wouldn’t allow anything out of my workshop in that condition. For the record, the work involved in bringing this specific guitar up to standard would cost over £300 in labour alone, plus around a hundred pounds for the hardware and pickups. Suddenly that cheap guitar isn’t so cheap.

On the plus side, after carrying out the remedial work it proved the concept superbly. Although the body is a bit rough, especially around the F-holes, the neck is amazing. It’s a great shape, really comfortable size and the fingerboard is really well made. Better than any of my Gibsons, in fact. The sound of the P90s in a thinline LP is like nothing else I have in my collection. Tonally it’s very like a vintage PAF, but with more attack and spank, especially on rhythm stuff. It’s a great ‘Blues / Rock’ guitar and being semi-hollow it’s lighter to strap on than a standard Les Paul and balances very nicely. I’m definitely convinced by the concept so one day I’ll get around to building a ‘proper’ one.