Inspired by the success of the original Strelecaster, I built another one for myself. 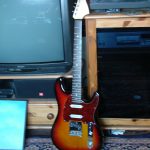 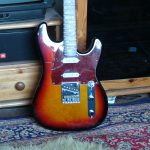 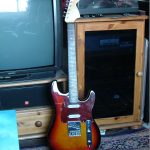 As you can tell from the CRT television, this is quite an old build! It was finished in 2004 and was built in my original caravan workshop.

I went with a traditional Alder body, maple neck and my preferred wenge fingerboard. The neck has a very pronounced ‘V’ shape which I don’t like so I’m making a new neck for it. The whole guitar is going to get an overhaul so look back for new pictures.

The paint was done by Rob Williams of Woodworm guitars. I believe he now trades under his own name. He did an incredible job of the 3-colour burst. I deliberately specified cellulose lacquer, which quickly felt like a mistake. The timber probably wasn’t completely dry when I sent the body to be painted and the finish very quickly crazed and cracked. I was really disappointed at the time, but actually it just looks nicely aged. I accidentally pre-empted the relic craze by nearly a decade!